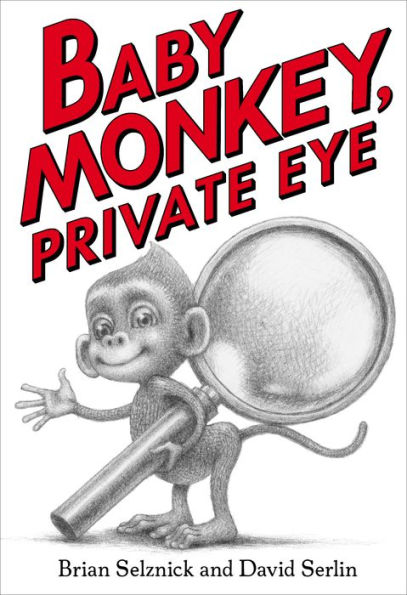 When I picked up this book, I thought it was made of magnetic paper, it was so hefty and downright luxurious to the touch.  Baby Monkey, Private Eye is a classic example of style over substance. Even though I find monkeys creepy (like clowns and puppets), the black-and-white pencil drawings with lots of negative space were easy on the eye.

The type was large and in a non-fancy font, so this was a great book for beginning readers.  However, each of the five chapters contained eight pages dedicated to the monkey putting on his pants.  I understand that kids enjoy repetition, but these pages could’ve been condensed to one, saving a few trees.

As for the mysteries, they were practically nonexistent.  The first time, I honestly thought two of the pages had stuck together because the monkey solves the case just by following a trail out of his office.  He goes from Point A to Point C–just like that.

However, I did like that the monkey read books, ate healthy snacks, and took notes, showing that he needed to do these things to do his job well.  I appreciated the “noirish” atmosphere and the references embedded in the office scenes (e.g. maps, paintings, sculptures, et cetera) that correlated with each case.  The newspaper headlines at the end of each chapter could’ve been cleverer, but like everything else, I believe these stories were meant to show patterns–giving children a chance to guess (and guess correctly) at what would happen next.

The last story was strange because it made you realize that you were reading about a crime-solving, crib-sleeping tot; a grown-up monkey would’ve made more sense, but maybe this monkey was a prodigy and the vics coming to him for help were dullards who wouldn’t know a detective from a hole in their head.

Another goodreads reviewer pointed out that Baby Monkey met his clients pantless but put on pants (with great difficulty) before investigating, so the vics would see Baby Monkey’s junk but not the perps.  The whole pants angle should have been squashed; he should’ve been wearing something the entire time rather than being “in the buff” while on duty.

One interesting thing I noticed was that when Baby Monkey was in his crib, all his stuffed animals were the same animals as the perps, so perhaps his “cases” were all a dream, which would make this story make more sense. To me, the idea of a baby monkey acting adult-like was as creepy as the baby in Toy Story 3.

Overall, the idea of this book and the illustrations are what made it worthwhile as a library read but not as something to add to my daughter’s personal library.  I feel like the story was written for the pictures rather than the pictures were drawn for the story.

My daughter enjoyed it, but then, with awesome illustrations and enough imagination and storytelling finesse, you can make even the most lackluster story shine.

Suggested coordinating activity:  Create a scavenger hunt, but customize it to fit your child’s needs.  For me, I like to do a prepositional hunt by having my daughter look for a book that I’ve placed somewhere (with the title her only clue), making sure as I have her search that I tell her it’s “above this/under that”, “next to this/next to that,” et cetera.  She’s got her verbs down, so this exercise helps her learn how to find things by following directions and using the powers of deduction.