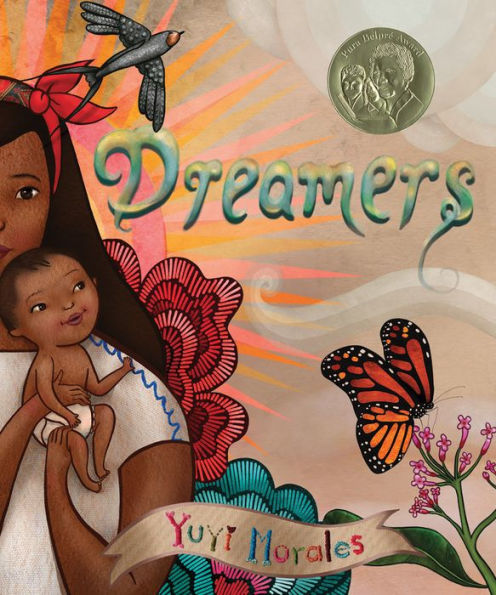 This is a case where the author’s personal story was more compelling than the one she wrote.  As for the illustrations, there is something very spiritual and surreal about them–the kinaesthetics reminded me of the frescoes of Michelangelo, the angles and bold color scheme, of Picasso.  However, I didn’t understand the significance of the skirt made of colorful feathers that seemed to defy gravity, the meaning of the people with the protests signs, or the symbolism of the eyeball in the strawberry.  It is a rare talent to be able to tell stories with words and pictures, but Morales should just stick with drawing because this was a poem trying to be a story.

The author’s love of libraries was evident–including the names/book covers of her favorite books was a stroke was perfect.  The magic of libraries seemed to be the major theme of the story rather than the angst of resettling in a foreign country in which there is a language barrier.

There was no juxtaposition between the author’s birth country and her adopted one; a little compare and contrast (like she did in the back of the book), as well as a more narrative storytelling style, would’ve added much more context to the pictures.

In short, the story did not do the pictures justice.

Morales was spot-on in making the point that when you are able to communicate in the primary language of the country you are living in, you can make your voice heard.  People just won’t listen (they won’t take the time to) if they don’t understand you. That is why literacy–not just in speaking but in reading and writing–is so important.  As for the Spanish words scattered in random places, I wish the definitions had been included. Having to look them up separately (or on my phone while reading) would’ve disrupted the flow of the story.

I’m glad the author made a distinction about what the word “dreamer” meant to her, though because of how the word is used today, I would’ve probably used another title.

The “extras” were better than the story, such as the list of other books the author found inspiring, as well as how she did the art (sometimes, the process is more interesting than the product).  However, her immigration story was the only part of this book that I found interesting; I thought it wonderful that she included actual names. What a delight that would be to be one of the people mentioned as having made such a difference in someone’s life.  I can only imagine how hard it is coming to a country where you don’t know the language (the language you are working hard to learn) and how relieving it would be to know that you had a friend you could trust–a friend who knew that language who could not only help you learn it but a friend who would watch out for you.

Ultimately, this story did not hold my daughter’s attention; so many children’s books are written only for the adults who choose to read to their children.  This, to me, was one of them.

Btw, I think if you’re going to give a book less than three stars, it would be nice if you would at least tell the author why in a civil way.  Otherwise, it comes across as mean-spirited.

Suggested activity:  Find a wall-sized world map, and, using pins (or tiny stickers), start pinning locations where the books you’re reading are published.  (The Fox on the Swing– earlier in this summer reading challenge–was published in Lithuania.)  Let your child pick a place; just fill your map with pins.