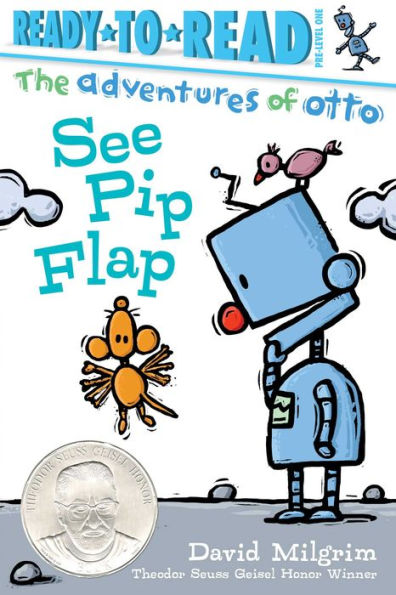 The purpose of See Pip Flap is to introduce reading to children just learning how.  In that respect, it works beautifully. What’s more, there is actually a story here where the words and pictures are equally important.  That said, a little repetition is fine, but we don’t need the word flap fifteen times in a row. At least reduce the flaps to three, following it with something else between flaps.

Basically, a mouse named Pip wants to fly with his bird friend, Tweet.  So, Otto the Robot seeks to equalize things for his friend by building a remote-controlled drone for Pip to be able to see what Tweet sees.  (Just remind your child that mice can do things birds can’t do, like burrow under tiny spaces.) Pip’s persistence, combined with Otto’s know-how, made Pip’s dream flight happen.

See Pip Flap was awarded the Theodor Seuss Geisel Honor, and it does remind me of Dr. Seuss’s early learning books.  It takes some talent to make a simple book like this enjoyable for the parent. The illustrations aren’t as good as Seuss’s, but they’re just as cute.  Page numbers would’ve been a nice addition, as I’ve taught my child her double digits that way; when children see numbers used in practical applications (e.g. digital clocks) rather than just flash cards which are only used for the purpose of memorization, they see the why, not just the what.

Of course, my daughter being a lover of robots was a sell for me.  Anything that introduces children to technology (and how it can help overcome challenges) is a plus.

Suggested activity:  Just as animals have their ways of communication, they also have their ways of moving.  Fish swim, snakes slither, turtles crawl, etc. Teach your child about these modes of transportation–even how humans get from one place to another (e.g. horse and buggy, bicycles, cars, trains, planes, etc).  Such is a good way to teach your child about the sixth sense: kinesthetics (the sense of movement): https://www.painscience.com/articles/sixth-sense.php.