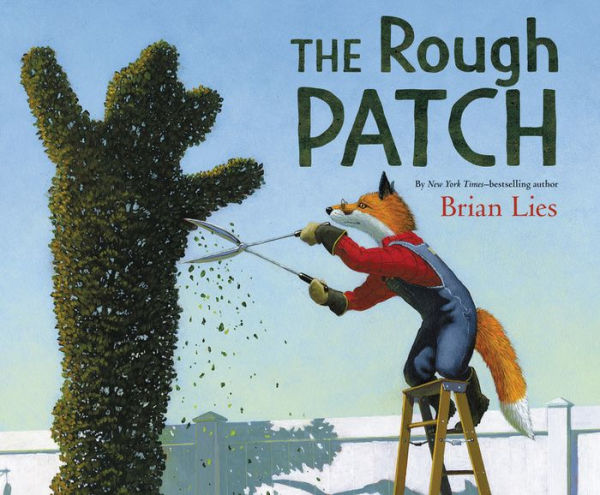 I’ve always found it strange when animals have other animals as pets (I’m still getting over Minnie Mouse, a giant rodent, having Figaro the cat as a pet)⁠—just like a fox owning a dog, when dogs generally hunt them down. What’s more, Evan was an odd choice for a fox’s name⁠—I think Mr. Fox would’ve been better. (Generic names worked for The Berenstain Bears.) However, Evan should’ve been a little boy rather than a grown-up fox (or even a grown-up human).

Yes, it just seemed strange for one animal to be practically human but the dog to be just a dog (i.e. like Mickey and Pluto). Disney made it work but Mr. Lies—not so much.

The author did, however, beautifully capture the weather, mood, and time of day with different “filters” and conveyed Evan’s grief perfectly (and heartbreakingly so) in the scene where he sets his paw on his dead dog, their faces turned away from the reader, which lent to the tableau a certain dignity. The lack of background on that page solely was symbolic of how alone Evan felt.

This is the only book I’ve read in this challenge that made me choke up, especially when Evan destroys what he and his dog loved⁠—turning their Garden of Eden into a rough patch of weeds that looked like something out of a Tim Burton movie—hacking his garden to pieces so that nothing good would ever grow there, reflecting the bitter, angry plot that had grown in his heart.

The Rough Patch shows that whatever we choose to nurture will grow. When an ugly vine snakes in under the fence—a vine Evan hopes will choke the life out of his garden—he decides to give it his care, only for it to grow into a prize-winning pumpkin⁠.

The juxtaposition of the cheery bluebirds and the creepy blackbirds, the cartoonish scarecrow and the shrub tree monster, the nourishing vegetables and the fruitless weeds (the last of which, along with pests, were fabled not to exist until after The Fall and death entered the Garden), the joyous sundown vs. the ominous twilight served as an allegory of Genesis, with Death representing Cain, the dog, Abel, and the new pup, Seth. Some might even see the Son of God as the pumpkin (fruit of the “True Vine”) that grows its way into Evan’s garden to finally ripen in his heart.

We know at the end that Evan is ready to make another friend, but I would’ve liked to have seen him plant something over the rough patch where his dog was buried.

What makes this story timeless is the lack of technology depicted—where a fox and a fox’s best friend (in this alternate universe) enjoy outdoor games, gardening, music on the radio, and sweet treats like old-fashioned ice cream cones. However, what kept this book from hitting the 5-star mark was the fox being a little too human and the abrupt ending; it needed an epilogue showing the happily ever after rather than alluding to it.

Suggested activity: I’m a huge fan of frozen vegetables⁠—they’re cheap, healthy, and taste good. They don’t go bad and make great soup additions. However, take a field trip to your local farmer’s market where it’s as much about buying produce as it is about the experience—where you’re able to feel and smell the produce (and sometimes even taste it⁠). Show your child(ren) that good food comes in a rainbow of colors. I often plate a pinwheel shape of different fruits and vegetables, and my daughter loves it.