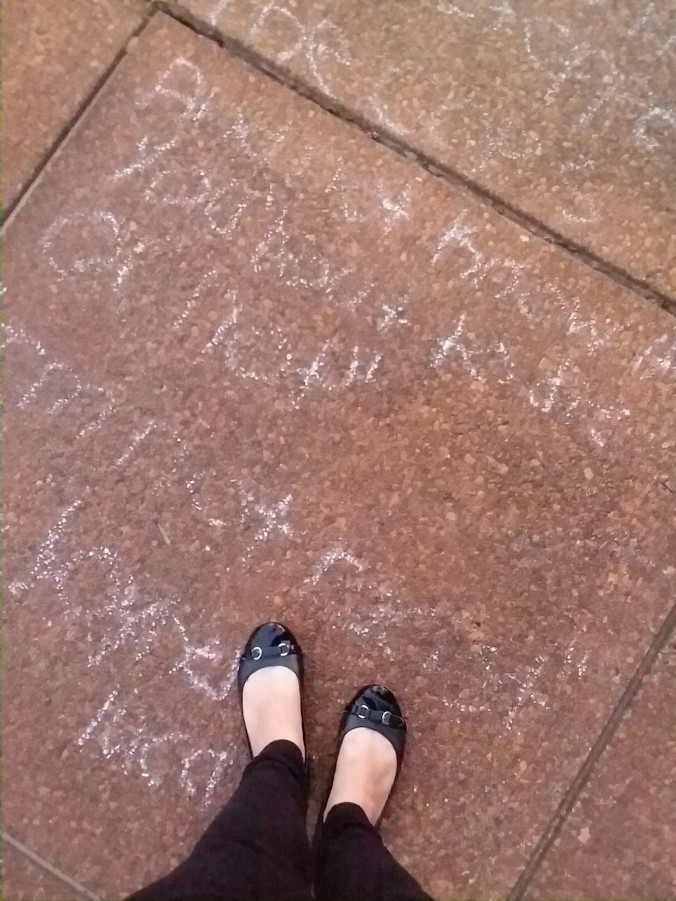 Remnants of a Poetry Walk on campus.

Being a Health Information Technology student, I seem an unlikely poet. I’m not all broody in a not-so-little-black dress, hanging out in non-corporate coffee shops, and my lipstick more resembles the color of blood than death.

My writing took off when I ended up placing in a college writing contest, with a piece on chimerism (when one person has two sets of DNA). That led me to taking Jamey Jones’ poetry class.

When I signed up for poetry, I was expecting a bunch of hipsters, but the students ranged from a red-hatted redneck who liked to talk about guns, liberals and communism, to a girl who told me I shouldn’t give evil corporations credit in my poem.

I’d never thought about doing a poetry reading until Poetry Night, when I performed “Hanging from the Family Tree”—a narrative about my family, who I like to say is the gift that keeps on giving (and, in their case, regifting).

So I was all poetry-esque in my white snood (a retro-style knit hat held in place with bobby pins), trying to keep cool so I wouldn’t break out in hives; I’d worn thigh high stockings (which were starting to roll down, so I had to take them off discreetly lest I be like Romy in Romy and Michele’s High School Reunion, where Lisa Kudrow tells her classmates that she lost her top).

During those minutes leading up to my turn, I was thinking I should’ve had a “sodaburb” (my pet name for bourbon, tempered with Stevia Coca-Cola), but I was stepping outside my comfort zone, barelegged and sober.

One of the guys in my poetry class had suggested we open with a joke; I’m no stand-up comic, but I’d overhead a good one while work-studying in the English Department (as I am a shameless eavesdropper): “What does the Secret Service say when they see a bullet coming toward the President?” “Donald! Duck!”

That cracked the ice, and the more I shared about my family, the more comfortable I became. I’m fairly certain I saw my ENC1102 professor wiping tears of laughter, and I was like, “I’d rather make them happy cry than sad cry any day.”

So I told the world (okay, about 50 people) about my mom who left her bras hanging on floor lamps, and confessed the sins of my father who used the dogs to pre-rinse the dishes. I flash-roasted my grandmother, who thought Obama was a Muslim because he had purple lips and her common-law husband (my grandfather, as far as I know) who helped dig up their dead dogs and put them in storage because they didn’t want to leave their candy-assed carcasses behind.

After that night, I felt more comfortable sharing my work; I’d always believed in it, but I learned also to believe in myself. I wasn’t just the message, but the messenger. I hadn’t gotten shot (and I’d done it without a shot).

I wasn’t being filmed (as the camera adds 50 pounds), so I didn’t have to worry about being tagged by a Facebook frenemy.

An encore performance was requested in the English Department the next day, and I felt, for the first time, I could shine without having to sing or act.

Performing among other poets that night in the library rotunda, I realized that poetry was a communal activity—almost spiritual in nature—bringing people of diverse backgrounds and beliefs together.

That night, I overcame my fear of public speaking, because I knew even if I was nervous before future readings, I would read anyway.

Originally published as “Majoring in my Minor: Poetry Night Stage Fright” in the September 2017 issue of The Corsair, Pensacola State College’s student newspaper; second place winner in the humor category at the FCSPA State Publications.

2 thoughts on “Humor column: What I learned at a student poetry reading”