He preached to the masses
of their filthy rags of righteousness,
but it was when he preached the “Happy Texts”
that his people saw less the ugliness of man,
& more the beauty of the Divine.

God was everywhere,
whether or not we chose to
drink Him in.
His DNA infiltrated our cells—
He had taken His image,
& made copies—
worth more than original
Picassos—
every one of which He paid
the highest price for;
though some would sell themselves
to the lowest bidder.

I’ve lived a thousand deaths such as these,
but the only two that will matter in the end,
will be the one that separates me from this earth,
& the one that reunites me with the God
whose work behind the scenes of my life
I recognize as per His direction.

“For he shall grow up before him as a tender plant,
and as a root out of a dry ground: he hath no form nor comeliness;
and when we shall see him, there is no beauty that we should desire him.”
(Isaiah 53:2)

To wish away her developmental delays,
would be to wish away what made her,
her—
the sweetness that was no burden
to those who loved her.

I was a million little pieces of the product
of my existence,
experiences,
memories,
welded together
to create something
beautiful.

Shyness maturing into introvertedness,
her ability to listen rather than speak became more appreciated
by those who loved to hear themselves & be heard.

Marriage gave her security,
education, possibilities,
children, stability,
for without these things,
she would be like ashes
in the wind. 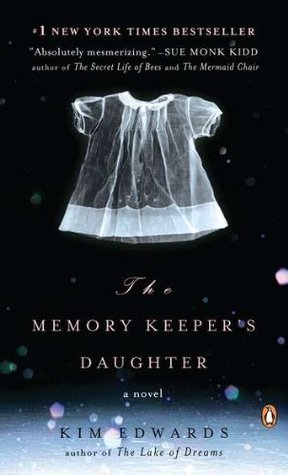 The title of this book is misleading, for the daughter (at birth) is more of a catalyst than a main character. We never get into her head. Perhaps the author wasn’t comfortable with speaking from the point-of-view of someone with Down’s Syndrome, but it would’ve been a stronger book had she attempted to do so.

This is what I call literary fiction, being more character-based than plot-based; the plot happens in the beginning, and we see what happens to the characters from there. I love the idea of how one decision made in haste can bring about unintended consequences.

I suppose the author expects her readers to sympathize with David, but I could not sympathize with any person who would give their less-than-perfect child away, and deceive their spouse into believing that child had died. What’s more, a father who would commit his daughter to an institution, to spare his wife the pain, at the expense of causing pain to his daughter.

Opening a few windows into David’s childhood did nothing to endear this reader to him. His decision was selfish and unjustified.

He was a modern-day Solomon who performed a separation; the real mother took his daughter, and so we never find out, “What would Norah have done?” Not the Norah at the end of the book, but the Norah at the beginning.

Rather than Sophie’s choice, it was David’s choice.

Though I cannot condone Norah’s (David’s wife’s) actions later in the book, as a woman, I can sympathize with them. Alienation of affection combined with the withholding of something precious is a powerful combination that can lead people to do things they wouldn’t normally do.

I know the author was using David’s photography as a metaphor, but the metaphor never came together for me. It was interesting, nonetheless, and, being a healthcare student, I found David’s observations about things in the world resembling what is inside us illuminating. (We are made of the dust of the earth, so it would only make sense he would see the unseen parts of us in creation.)

Generally, I find myself more drawn to one character’s story than another, but I didn’t find the switch back and forth from David’s story to Caroline’s story jarring; both were equally interesting.

“The Memory Keeper’s Daughter” is the story of how a secret can grow between two people like a tree, until their arms can no longer reach around it.

Like life, this book was full of unanswered questions and unfinished business—it left me feeling bereft, like I’d been walking through a blue-hued London fog for hundreds of kilometers, never seeing the sun. It was an interesting read more than it was a good one, but worth the time.