The Usefulness of Things

Mary Kay Downtown Brown lip shade
for whiter teeth;
Wet n’ Wild lip gloss
for wet, Foxy News lips.
Hair crimper,
for when you have
fine & frizzy
white girl hair.
Pink diary,
for when you need a friend
who’ll just listen
(& maybe an alibi).
White board,
for working quadratics,
& reworking quadratics—
a representation of my memory,
which is continuously being erased,
& recorded over
with solvable problems
I don’t quite understand.

Peyton’s Place
She wrote a book, writing what she knew.
What she didn’t know, she created,
but it was the truths,
prettied up as lies,
that led the ones
whose sins she confessed,
to stone her with tweets.

Newscasters=news analysts, not news readers
Endless spin cycle
Who, what, where, when, why, how, & what if?
Sensationalized for ratings

Nature enables us to see as far
as our eyes can see,
books beyond even that,
but books read out in nature,
bridges both worlds.

When Period met Dash,
it was a string of stops & starts,
until they learned to work together,
creating the Morse Code.

Bloomberg isn’t running for President after all.
Will Biden run for President?
Will Romney run on a third-term ticket?
Classic stock market speculation.
It isn’t news if it doesn’t bring in the ratings.

The manufactured feud between
Megyn Kelly and Donald Trump
has ended in a kissy-face one-on-one.
Since when did bar-hopping attire
become the cable news anchor look?

A celebrity has died.
Not exercising is bad for you.
O’Reilly has written another book.

Another celebrity has died.
Five days later,
we’ll stop hearing about it.

“Breaking News” has become
“The Boy Who Cried Wolf”.

Through the haze of punditry,
and over the babble-bobble of the talking heads,
I begin to have cravings for real news,
but, like a gold miner of yore (or ore),
I must sift through the infotainment—
many times on fast-forward—
to find the nuggets of truth
that have been crushed to dust. 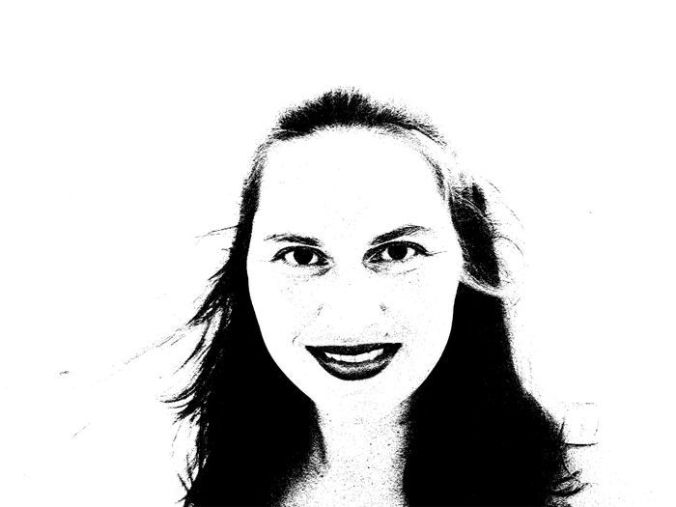 I am a Strange One:

A Self-Portrait in Writing

I turn my clock backwards
before I go to sleep.
I am a strange one.

I don’t like to sleep on pillows,
but rather between two of them.
I am a strange one.

I am studying to work in the healthcare profession,
but the sight of blood makes me faint.
I am a strange one.

I love to read crime thrillers,
but I love to write children’s nursery rhymes.
I am a strange one.

I read the dictionary for fun,
Hemingway for school.
I am a strange one.

I love foreign films with subtitles,
but close captioning drives me crazy.
I am a strange one.

I love and appreciate fine art,
but have a hologram of a tree hanging in my house.
I am a strange one.

I watch Fox and read the HuffPost.
I love the Shopaholic series, but am a fan of Dave Ramsey.
I am a strange one.

I like Coca Cola from Mexico,
but I would never drink the water there.
I am a strange one.

I don’t love to cook,
but I love to watch cooking shows.
I am a strange one.

I’d much rather “meet my meat”
than cook it.
I am a strange one.

I buy a new fruit or vegetable first,
then try to figure out what to do with it later.
I am a strange one.

I love most everything fried,
but I prefer my fries baked.
I am a strange one.

I don’t like bananas,
but I love banana cream pie.
I am a strange one.

I love the beach and water aerobics,
but I never learned to swim.
I am a strange one.

My dream vacation is in Iceland,
but I hate the cold.
I am a strange one.

I love cat jokes,
but will probably never have a cat.
I am a strange one.

I like to make bars of soap,
but I prefer to use body wash.
I am a strange one.

I am a night owl,
but I hate when it gets dark early.
I am a strange one.

I hate cold weather,
but I love to be able to wear nylons and sweaters.
I am a strange one.

I find brassieres uncomfortable,
but not bikini tops.
I am a strange one.

I prefer skirts and mittens
over pants and gloves,
because I like my parts to touch.

I don’t like beards,
but I like a man who can grow one.
I am a strange one.

I like a man who wears cologne,
but I don’t wear perfume.
I am a strange one.

I don’t mind loading washers and dishwashers,
but I hate emptying them.
I am a strange one.

I love shopping for clothes,
but I hate trying them on.
I am a strange one.

I live in the Deep South,
but I don’t say y’all.
I am a strange one.

I don’t have a single tattoo or piercing,
yet I love chandelier earrings.
I am a strange one.

I am an introvert,
but I wait tables for a living.
I am a strange one.

My truths may be strange,
but they are not stranger than fiction.
We are all contradictory,
and, at times, just a little bit OCD,
in our own way.

But at least I don’t go to a seafood restaurant
and order a hamburger.

So my husband and I are fans of “Wheel of Fortune.”  We even play the Xbox game, and it can get heated (especially if I “buy time” by buzzing in like I know the answer and take the full 70 seconds to figure it out).  He says it’s cheating–I say it’s smart.

I chose to gripe about the most benign show in existence–“Wheel of Fortune”–the game show that makes you feel brilliant after watching “Jeopardy”.  (Btw, a “fickle wheel” is how AT&T describes the show in their synopsis.)

Buying unnecessary vowels,
calling letters that have already been called–
it’s not using your noodle, is all.

Listening to the host without the most,
who holds the female contestants’ hands to the Bonus Round,
makes me want to wash my hands and whiskey-wash it down.

Contestants who jump up and down after every triumph,
who use flowery adjectives to describe their significant others,
who rattle off all their kids’ silly, pretentious names,
are just a few of the many gripes I have about America’s game.

Lucinda Bahl catered and pandered to the one-percenters,

which was quite laughable,

as she thought they were greedy bastards

behind their majestic swagger.

She always greeted them quite obsequiously in disguise,

in a maid’s uniform concealing her tramp stamp—

a hint at her lower class from Flushing.

By dawn, she cleaned their houses;

by dusk, she cleaned their clocks.

In manic states of unrest and undress,

she was quite fashionable with body paint caked on as camouflage,

as she skulked through her employers’ McMansions,

with copies that mimicked the worthless works.

She was a zany, green-eyed bandit,

a klepto with dual personalities,

who often hobnobbed with her alter ego.

She drugged (or roofied) her masters,

rolling the women for their jewels,

then noiselessly, in bare feet,

tipsy-toed to the other side of the bed

and reached under the bedroom blanket for the family jewels.

her eyes would turn dark with excitement as she hurried,

finishing with a gust of breath.

Her right hand knew not what her left one did,

Every year, she would have a baby bump,

which always aroused a kerfuffle.

DNA was a woman’s best friend,

and a compromise would be reached without a scuffle.

Mr. and Mrs. would negotiate for the baby,

in exchange for the boodle,

and none was the wiser,

for they didn’t use their noodle.

It was a safe bet for Lucinda Bahl–

this belle of the balls.

Being a millionaire heiress herself,

her father being the inventor of the Spice Racketeer,

she was still lonely.

Prone she was to metamorphize into a generous, frugal soul,

which became a strange attention addiction.

Nevertheless, she was remorseless

when she was in her right mind (or left brain),

for she blamed the haves for the have nots,

that littered her lawn like gnomes with their deafening cries,

making her gloomy and disheartened.

Then it became apparent there was an outbreak

of some disease which caused lots of bloodstained puking,

and an eyeball so lazy it wouldn’t bother to open.

The only cure was a glass of skim milk,

which would ease the discontent.

It was quite the source of gossip.

The men (all friends) began to realize they’d been had,

and when Lucinda came to work wearing an eyepatch,

they decided to fix her unwelcome wagon once and for all.

They had suffered character assassination from the media,

and from countless anonymous online critics;

they had suffered savagery from their children,

torture from their wives,

who took delight in besmirching them to their mothers,

taking them to court and ruining their lives.

They wanted to charge Lucinda with unlawful seduction,

though they realized it was all circumstantial evidence,

for Yonkers was going bonkers with it.

but lackluster and flawed.

who lived rent-free in her head.

with lots of advertising from social media,

and with the backing of varied sponsors such as

Eastborough Baptist Church of the Quiverfulls.

“The Real Housemaid of NYC”, her label,

was obscene, but marketable,

and the gnomes had their hero.

Many assumed it had been a premeditated publicity stunt.

It was unreal, monumental,

this champion of the “working class”,

who was just a rehash of white trash.

She became a fixture on the cover of Starr–

a courtship that would last for 15 minutes.

However, it was never enough exposure,

and she got a show on MSNBC.

but an open platform to rant about the dangers of breathing

pandering to their audience of 1000,

She missed the ratings,

and so she filmed herself submerging in a bathtub of iced tea,

complete with a Dalmatian,

However, her girls, once fans, had become jaded,

even though she got an interview with the President,

who was quite a pedant,

much to Fox News’ amazement.

Her daughters remained with their sperm donors,

in their birthplaces in the five boroughs of New York,

and she retired from her life of psychosis and crime,

feeling more secure in a place she belonged–

the last star of “Stars Behind Bars”.

but at the end,

had groveled for a sex change while on the mend.

The buzzer went off,

and pumped full of meds,

awoke from her little trip back in time,

feeling tranquil without a dime.

Tis the end of my ode to those who dream of a life of reality stardom,

and to those who watch it.

For today’s prompt, take a word or two (I took it a step farther and used ALL of these:  http://www.shakespeare-online.com/biography/wordsinvented.html) invented by William Shakespeare, make it the title of your poem, and write your poem.

What you are about to read is truly absurd (which is one of my favorite words, as it can be used to describe many things).  It’s sort of a riches-to-rags story involving a dizzy redhead and is a satire/spoof of reality TV.