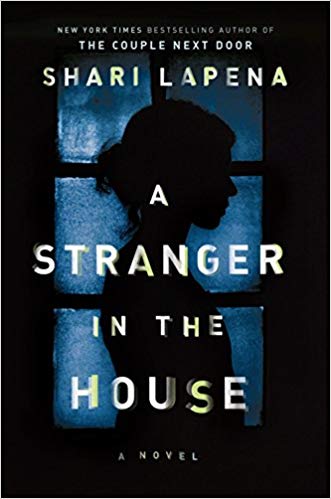 After reading Lapena’s The Couple Next Door, I was expecting the same tightly-woven and twisty plot.

Such was not the case (no pun intended) with this one.

Lapena is not one for sympathetic characters or happy endings, which is fine if the plot is good.  Unreliable narrators are awesome plot devices but not for mysteries because part of the fun is putting the pieces together; when the pieces don’t factor in to the puzzle at all but are rather imaginary pieces, then it’s pointless–there is no need for foreshadowing because it’s going to be a total surprise with no clues leading up to it.  In other words, everything we’ve read up until such-and-such point could be a total lie.

I agree with some other goodreads reviewers that the amnesia angle (like evil twins) is overused, but nevertheless, it’s always fun.  Lapena is obviously a fan of Hitchcock with her shades of Rear Window, but Stranger was lackluster.

I don’t mind the immediacy of the present tense, but Lapena should brush up on comma rules.   She does more telling than she should, but there are enough scenes with dialogue that it’s forgivable.

The character of Tom was quite awful.  His initial reaction to his wife not being home (when she obviously left in a hurry) wasn’t one of worry but of anger.  Maybe he has secrets of his own.  Supposedly, Karen was in love with him (we are told this, or rather, she tells us this), but I just didn’t get that vibe.  He just happened to be a handy, cheating sap.

Brigid was the only interesting character.  I thought it was hilarious that she hated Karen for not  caring about her knitting blog. (Karen didn’t knit and yarn didn’t really seem to be her fabric–she was more the blazer type.)  I didn’t like Brigid, yet she was the only one I felt for in the end.

I’m not sure what purpose Brigid’s husband played and why it was important that he was a funeral director/undertaker except maybe it was symbolic that because he dealt with death so much, he couldn’t possibly spark a life.  Maybe he made Brigid die inside, and that’s why she had issues, though honestly, we’re only privy to him through her warped filter.

I’d swear Lapena was a cop in another life because in her books, there are basically two kinds of people:  the guilty (where no one is completely innocent) and the cops. However, the cops only seem innocent because we don’t know anything about their personal lives (like “Dragnet”; unlike “Law and Order”).

I liked that Rasbach was back on the case–he is definitely one I’d like to know more about but not if Lapena would do his character an injustice.  He’s almost more of an entity–a representation in human form of the right side of the law–than he is a character. He did, however, have a great idea:  get a background check done on anyone you are seriously dating.

If Lapena could just differentiate her minor characters more–the cops and the lawyer were interchangeable when it came to personalities; there is really nothing but their names to distinguish them from one another.

I don’t recommend this book, but neither did I feel it was a waste of time.  It was…an experience.

She’d been told she was serving the wrong side,
protecting the guilty
rather than punishing them.
She saw it as sometimes protecting the innocent—
the very least among them—
doing for them what they could not do for themselves.
She was the voice for those
who had already been convicted by the media—
for those in jail,
whose guilt had not been proven.
Her faith kept her sane,
for she knew the guilty ultimately never got away.

The bells of St. Mary’s peal,
shattering the glass ceilings
of dreams I put to sleep,
piercing the silence with the sound
of angels getting their wings—
a plaintive cry from the earth
to the heavens—
a tribute.

There is a changing of the guard,
and the rapid footsteps I know as Ritz’s,
echo on the dull linoleum.
The wails of the innocent,
bounce off the cement walls.
Those sounds are all that is soft
in this purgatory of iron rods.
Heaven, Hell,
or Heaven or Hell on Earth—
those are the only destinations
after leaving.

Ninety-nine years
a man lived,
having taken a life—
the life in these walls
who pays for his sin,
and the life he took,
who paid the ultimate price.
All that mattered was that
someone paid it.
It mattered not who.